Surf Heater’s very own Sam Pell and Strange Ben break down who is most likely to bless up on the 4th stop of the World’s Championship Tour.

The Event: Rio De Janeiro, the land of shitty beach breaks, shifty g-strings and shitty claims. Toledo would be a no brainer to win here with his huge airs but he’s out…just kidding Toledo is back.  Ke11y, however, has pulled out of the contest citing his desire to play Poseidon in Lemoore, CA and the recent murder witnessed by California Nugget of Glory, Conner Coffin and Carissa Moore while on their way back to the hotel after lunch. Ready the story here.

The Setting: Rio is dangerous. Very dangerous. The Brazilian President Dilma Rousseff was impeached on charges of corruption last week but the Senate just announced that they are going to annul the decision. Can we annul Rio and bring in somewhere interesting? Tofino? Keramas? Puerto? Buehler? LEMOORE!

The Wave: After a powerful storm broke the catwalk at the primary venue, Postinho, the event organizers are scrambling to move the event to Grumari. Grumari is a punchy at low tides and a little soft on the high’s. It’s well suited for aerial attacks and the forecast is looking small.

#1 Kolohe Andino: If there’s anyone on tour who knows how to surf a 3 foot beach break to perfection it’s Target’s® own Andino who is currently #4 in the world after a strong showing in the land down under.

“Kolohe seems to have tapped into something special with his post heat interviews, but I still can’t help but look at him with disdain.  He has this aura about him.  You can feel..  Pretty sure I’ve seen his joinker on snapchat, too. I don’t know.  Hope he shreds a few.” -Strange Ben

#2 Conner Coffin: The Great Cali Nugget.  A bit of a dropoff after the last contest, currently sitting at world #11.  I think the Santa Barbarian will be able to harness the adrenaline of watching somebody get shot and at least make a couple heats.  He seemed incredibly calm following the shooting, stating, “It was pretty gnar.”  Yes, indeed it was young Nug.

“Saw the Great Nug at Cadiz on State street two weekends ago sappin on some strawberry concoction. Kid has such nice hair.  He’s jolly, too.  One of those people you just want to hug and shake and grab.  Favorite surfer on tour.  Gave him a few tips.  I don’t know why I did that.  I’ve always liked to give tips to professionals.  I once gave Richard Jefferson a thirty-minute pep talk on how to improve his baseline jumper.  He definitely listened.” -Strange Ben

#3 John John Florence: When will the grom break out? He is by far the most talented surfer in the world. Have you seen View From A Blue Moon? He seems to be in peak form and is visibly frustrated with his lack of success on tour. I expect this kid to bless up sooner rather than later.

“I’m hoping JJJ (how many J’s again?) does something in this next contest. After his string of underwhelming performances, we know he’s angrier than Strange Ben stuck in traffic. The judging on the tour just doesn’t let the kid break loose the way he should be. REVOLT young one. Revolt.” 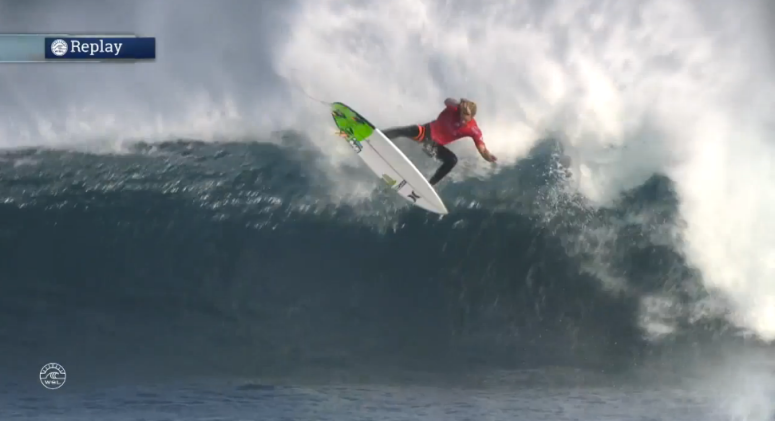 #4 Seabass: The Kauaian Kid. After falling off the tour last year, he got the injury wildcard for the Australian leg and now finds himself ranked #2 in the world. He credits his success to opening a gym with his girlfriend in Kauai. I’d be ripping to if I was sucking down lychee all day doing power squats. Let’s fucking go!

“I’ll only say this…not too long ago I was selling Lychee on the corner of Kuawa and Kuhio in Kilauea town, where the Bassmaster hails from.  Five dolla or ten dolla bags, rain or shine.  Seabass always takes a ten dolla bag. Shoots! See you at the lighthouse for happy hour, kid.” -Strange Ben

#5 Kanoa Igarashi: Even though the kid talks like he is about to burp up a soft boiled egg, I’ve seen him light up the south side of HB Pier and his quick footed approach can be a lethal combination at Rio. I wonder what local crew is more eggy. The crowds at HB Pier or Rio? I’m going with HB.

#6 Felipe Toledo: Just like the fervent fans of Rio, Felipe can blow up on any sized beach break. We’ll have to see how his groin injury limits him, but even at 90% my money is on Toledo to at least make it to the quarters.

“Felipe looks like a rat. There, I said it.  I don’t mean anything by it.  Rats are beautiful animals.  One of the most balanced animals around.  It’s all in their tails.  Have you seen a rat walk across a wire? Tail is fully extended, hedging back and forth, helping to shift its weight in either direction…whichever is needed to stay on the wire..  Anyway, yeah, Felipe surfs well.” – Strange Ben #7 Gabriel Medina: “Peter” Gabriel Medina is obviously going to be the escolha de pessoas in Rio’s crime ridden beach breaks but will he be able to step up to the plate? Gabe hasn’t been his same self since winning it all in 2014. Maybe he needs less hamstring massages from his step-dad and more time in the water.

“It’s strange,” said Strange Ben, “it seems everyone still treats him like the best surfer on tour.  Well, actually, he probably is top 3 skill wise, but I still don’t understand him.  Cultural thing, I’m sure.  That and those hammy mashers from step-papa.  Yes, it’s definitely those.” -Strange Ben

#8 Italo Ferriera: What a name. What a surfer. This kid can surf above the lip and fit in hack after hack on small waves. He placed equal 3rd last year and I’m expecting a repeat performance from the Brazilian on his home turf.

#9 Dusty Payne: To be honest, Dusty absolutely blew his chance last year on Tour and blew it at Marg’s as well. He was visibly angry at losing in Australia and I think he’ll be one to watch in Rio. His tendency to surf undersized boards that seem to skip on the water may be perfect for the shifty beach breaks of Rio. Maybe. He catches a tough first round heat drawing both Felipe and Konoa in the first heat of Round 1. Either way, we’ll be watching to see his temper tantrum if when he loses.

“Love Dusty’s violence in the water.  Manic fist throwing, thizz face mean muggin, underwater Siren screams…love it all.  Part of me hopes he almost does well/almost does bad….i think there’s a sweet spot in there where we can get some incredible meltdowns.” -Strange Ben

#10 Jack Freestone: The kid can punt, there’s no doubt about it. But I do wonder if he even surfs anymore with a girlfriend like Alana. I wouldn’t.

#11 Adriano De Souza: God I’m dreading writing about ADS but I know I have to. He’s the one guy on tour I look at and say “I could probably do that turn.” The thing is he does 8 of those on a wave and finishes strong with a claim. The judges love it. The judges always hated me and my crooked-back snaps. Best I did was advance to the repechage in the Newport Classic of 2004.

“I slayed that repechage.  Except it wasn’t the Newport Classic. It was the Wild Rivers Boogie Surf Invitational. No hardboards. No leashes. No peeing in the pool. You didn’t have to wait in line as long as you never lost your boog.  Lifeguards would steal it if you did.  I won that contest every summer until they paved it for corporate housing. Fuck that. Fuck it good.” -Strange B