Kelly Slater just subtly announced he was accepting the injury wildcard for the 2018 season after his supposed “Last Lap Tour 2017 ” was cut short following a foot injury at Jeffrey’s Bay, South Africa.

Renalto: Event is OFF for the year! Last day of the window at Pipe! Thank you all for the support. For those of you back on the QS campaign, best of luck next year, hoping to see you again on the CT 19. For those of you that cut into the 22 for 18, congratulations. Next call 7AM, March 11th at Snapper! Merry Xmas!

Slater: Nice. I’m sleeping in. I don’t like morning heats so make sure that March 11th draw has me in the back half! 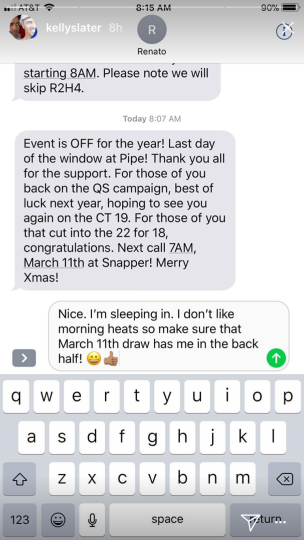 Does this confirm he will surf a full season next year? We think so. Still, questions remain.

Will he go till the wheels fall off?

Will he have a Kobe Bryant-like victory send off tour?